HTTPS is on the rise. This is a good thing. HTTPS ensures your network communication is encrypted in both directions, protecting your app’s users. If you write the code

you are basically doing the same as a user entering the URL into the browser’s address bar would do. The user agent does a handshake with the host you specified, retrieves its certificate and checks the validity of that certificate according to a few criteria, e.g., host name, expiration date, revokation, and trust chain. Let’s have a look at a certificate, in this case the one for www.microsoft.com: 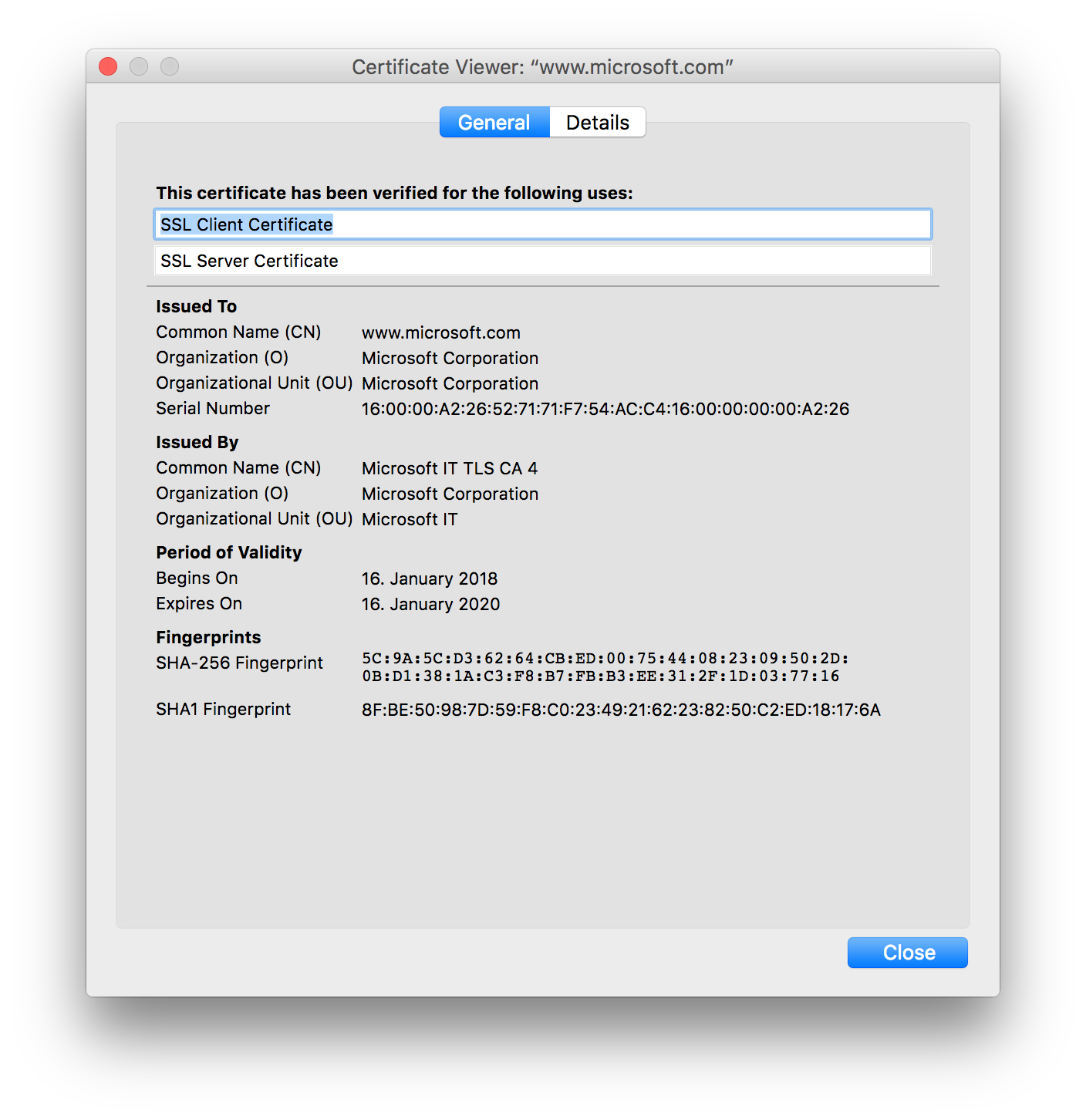 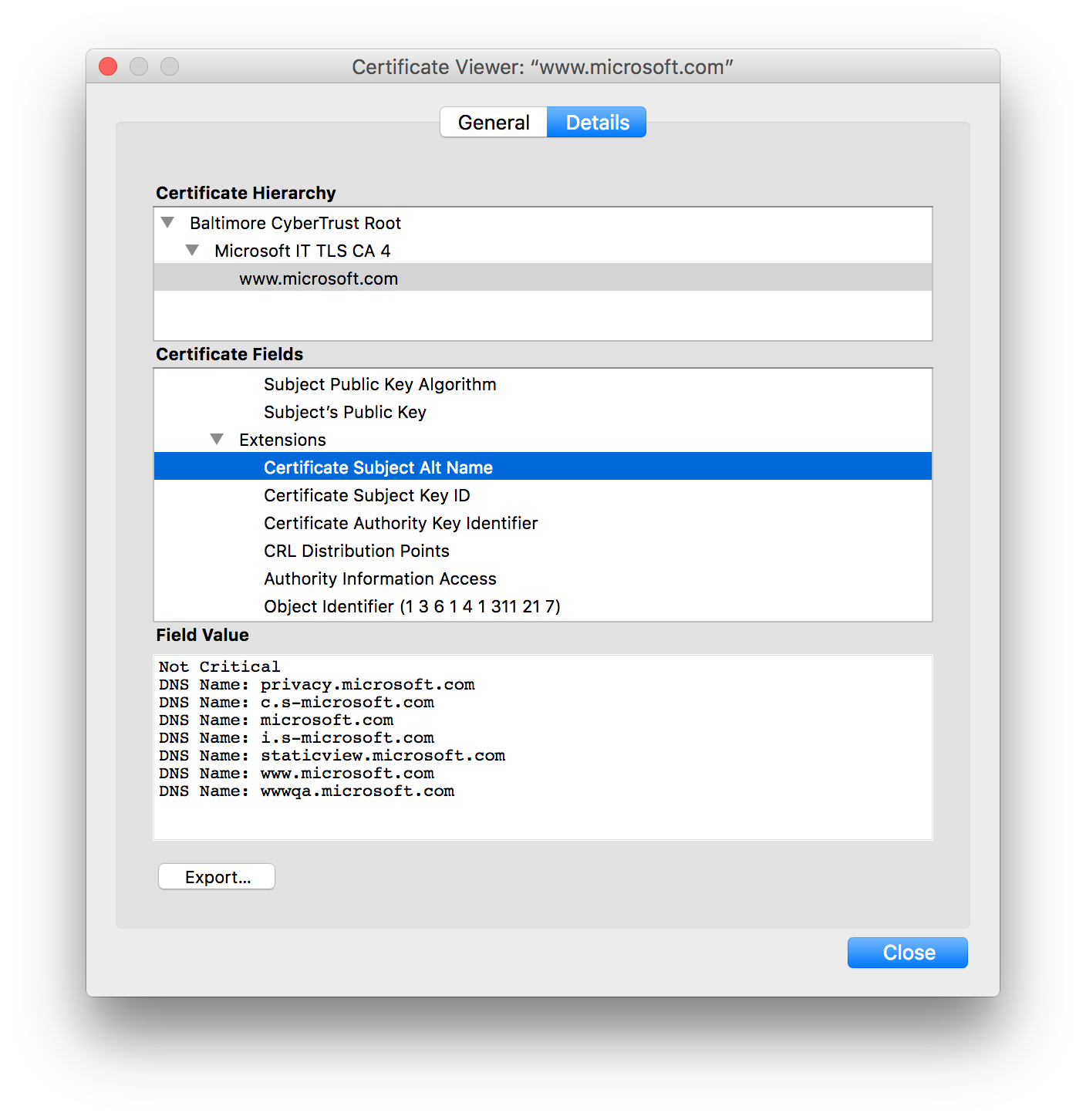 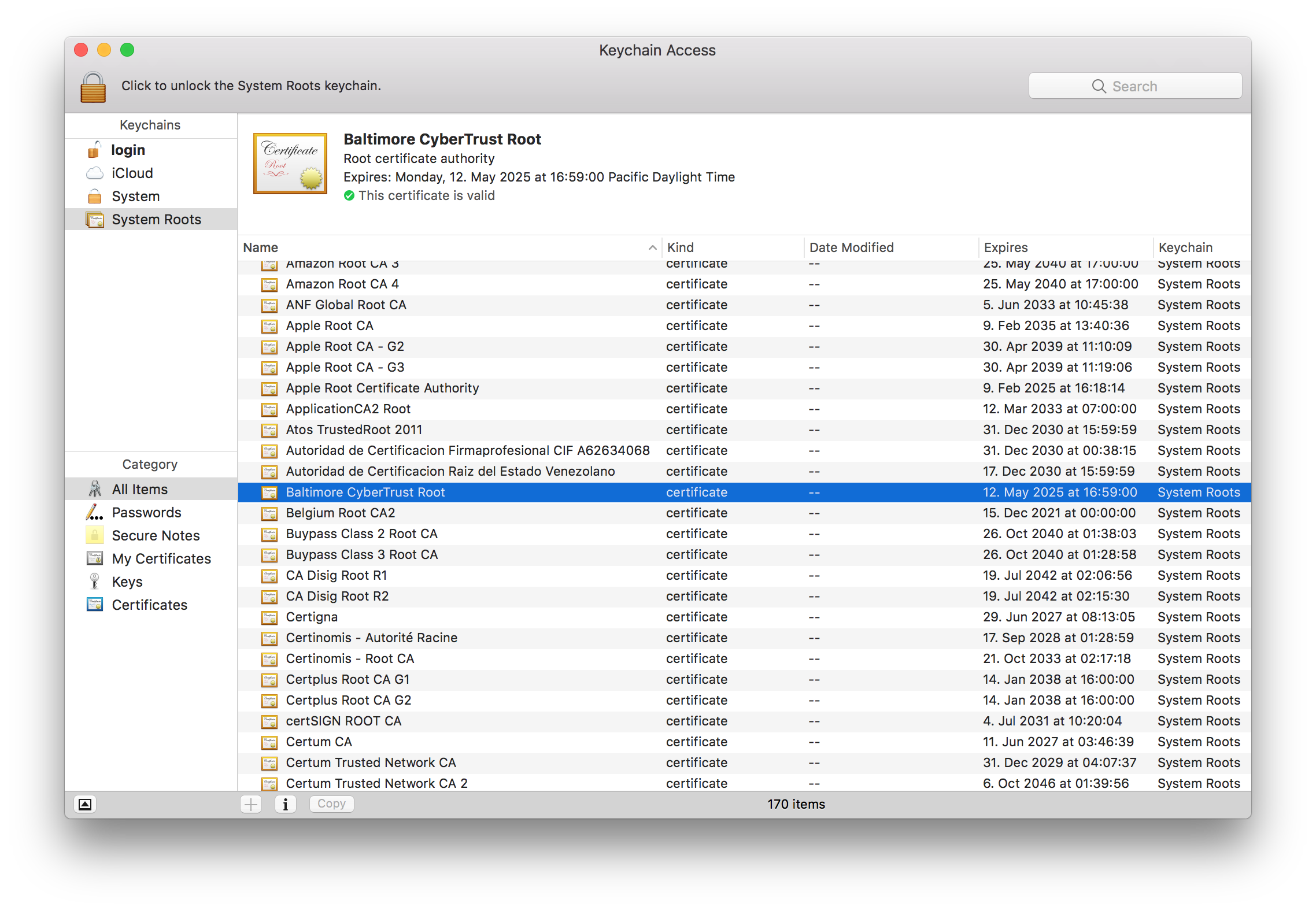 This root certificate list is unfortunately the weakest link in the entire HTTPS story. Most users don’t check which root certificates are installed on their machine. There have been cases where computer vendors added their own certificate to the root certificates list. And there are also numerous companies that install the company’s root certificate onto each employee’s device so they can monitor all traffic by doing a man-in-the-middle attack.

For the browser story, this is currently the only way to make sure your browser can connect to all HTTPS servers on the internet, even those it has never contacted. But for a connection from a mobile app to its backend, you usually know exactly which server you’re connecting to. From a security perspective, it is a good idea to take advantage of this.

Check which server you’re connecting to

This code replaces the default certificate validation with custom code. This code compares the public key of the server’s certificate with the expected pubic key of the server. This public key corresponds with the private key that is installed on the server. Since it is not possible to derive the private key from a public key, this means that we can guarantee we’re talking to that one server and not any server our operating system happens to trust.

This code has a couple of limitations you should be aware of:

What is commonly referred to as SSL (Secure Sockets Layer) was actually renamed to TLS (Transport Layer Security) in 1999. TLS 1.2 is the current version and TLS 1.3 is expected to be finalized soon. All older version, including SSL 2, SSL3, TLS 1.0, and TLS 1.1 should not be considered sufficiently secure anymore at this point. At this time, TLS 1.2 should be used for all communication.

When using default settings, both the client and server will allow downgrading the connection to an older standard as part of the initial handshake. This is to allow new clients to connect to old servers and to allow old clients connect to new servers. But since we’re controlling both client and server, there is no reason to allow downgrades to the not sufficiently secure TLS version 1.1 or lower. The solution is to force both the client and the server to only allow TLS 1.2 connections. With HttpClient in .NET, this is done like this:

If you’re using Azure Websites as your backend, here’s an article on how to disable older TLS versions.

Xamarin developers will have to be aware that there are different implementations of HttpClient available and not all support TLS 1.2 or other security features. For help on picking the right HttpClient, I wrote a blog post entitled The many flavors of HttpClient.

Pinning both the certificate and the TLS version will make it much harder to intercept the communication between your app and its backend. It should be employed whenever making calls to a backend within the control of the app developer.